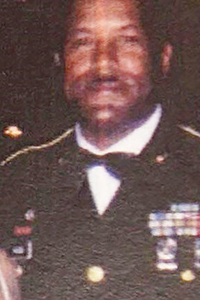 Robert attended and graduated from Bogalusa High School in 1976.

Robert joined the U.S. Army in 1979, and he served his country faithfully and honorably until his retirement in 2004 with the rank of Master Sergeant.

Robert leaves to cherish his memories: his wife; Brenda Davis Booth of Bogalusa; three children, April Lynette Fields of Bogalusa, Robert Leon Fields of Bogalusa, and Kyla Booth of California; two step-sons, Roderick Davis of Slidell, and Kendrick Davis of New Orleans; one sister, Lula Booth Tanner of Baton Rouge; and one brother, Houston (Carol) Booth of Laplace; 13 grandchildren and host of other relatives and friends.

Robert was preceded in death by his parents, Robert P. and Octavia M. Booth; and a sister, Ezella Booth.

The funeral service will be held on Saturday, Oct. 9, at 11 a.m. at the Cook-Richmond Funeral Home with the Rev. Christopher Matthews officiating. Interment will be in the Southeast Louisiana Veteran Cemetery in Slidell.