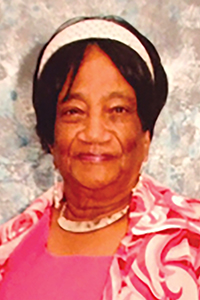 “I love the Lord, because he hath heard my voice and my supplications. Precious is the sight of the Lord is the death of his saints” (Psalm 116: 1, 15).

“For I am now ready to be offered, and the time of my departure is at hand. I have fought a good fight, I have finished my course. I have kept the faith” (2 Timothy 4:7-8).

R. Lee Brumfield McClenton entered her heavenly home on Sept. 26, 2021, at the age of 87. R. Lee, a native of Varnado, and a resident of Bogalusa, is survived by two daughters, Gloria Jefferson and Effie (Hurshell) Hatcher; and one daughter in-law, Kim McClenton.

R. Lee embodied a kind, gentle, loving spirit that resonated with all that came into her presence. She was affectionately called “Muh” by her children and grandchildren, as well as others in the community. She was a strong matriarch and great role model for her family and loved ones.

Visitation will be Saturday, Oct. 9, at The Kingdom of God Church, 814 Union Ave. in Bogalusa, at 10 a.m., with funeral services starting at 11 a.m. Interment will be at the Robinson Cemetery in Varnado.