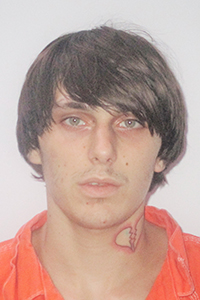 Joseph Harper, 19, a resident of Louisiana Highway 62, was sent to the Washington Parish Jail on charges of burglary of an inhabited dwelling and contempt of court. His bond was set at $11,000.

On Tuesday, Sept. 21, a Washington Parish Sheriff’s Office deputy responded to a residence on Gene Williams Road in reference to a complaint, according to WPSO Chief Criminal Deputy Mike Haley. Haley said that the deputy reportedly discovered that Harper had made entry into the residence through a bedroom window. When confronted by the homeowner, Harper left, apparently taking the victim’s debit card, which later was used for online purchases, Haley said.

On Wednesday, Sept. 29, a WPSO lieutenant received information that Harper was in the area of Gene Williams Road and Squirrel Alley driving a vehicle with a Mississippi license plate, Haley said. The lieutenant reportedly spotted the vehicle and then located Harper inside a nearby residence. Harper was arrested and transported to the Washington Parish Jail for booking.

Haley said that Harper has a record of one previous arrest in Washington Parish. In November 2020, he was arrested and charged with aggravated battery, battery of a dating partner and criminal damage to property. After spending six days in jail, he was released on a $30,000 bond.

“Young Mr. Harper is paving a treacherous road for himself,” Washington Parish Sheriff Randy Seal said. “Unless he turns his life around quickly, he might be destined for a lifetime of arrests and incarcerations. I congratulate our patrol deputy and lieutenant for investigating this case, following up and making the arrest. Good job, men!”