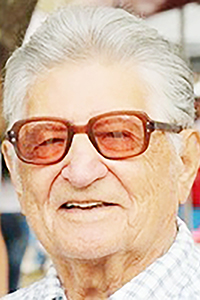 Mr. Ignazio “Neish” Longo, a native of Endicott, N.Y., and longtime resident of Bogalusa, passed away in the evening of Sunday, Oct. 3, 2021, in Baton Rouge, surrounded by his family at the age of 94. He was a U.S. Navy veteran after serving 24 years and he also served for four years in the U.S. Air Force. He was also a member of Annunciation Catholic Church.

Mr. Longo was preceded in death by his wife, Betty Lou Longo; his parents, Anthony and Anna Longo; his brothers, Vito Longo, William Longo and Richard Longo; and his sisters, Antoinette and Anna Longo.

A graveside service will be held Wednesday, Oct. 6, at 11 a.m. in the veterans’ plot at Ponemah Cemetery, with the Rev. Father Daniel Brouillette officiating. Military graveside rites will be performed by Magic City American Legion Post #24.