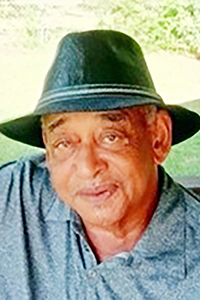 Mervis Johnson Jr. was called home on Sunday, Sept. 3, 2021, at Our Lady of the Lake in Baton Rouge.

He loved fishing, telling funny stories, helping others and being around his family. He is a “True Legend,” loved by many.

A funeral service will be on Saturday, Sept. 11, at 3 p.m. with the Rev. Christopher Matthews officiating. Interment will be in Second Mt. Bethel Cemetery.