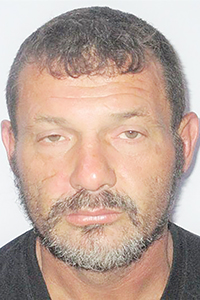 Danny Woodward, 41, a resident of Louisiana Highway 438, was arrested on Monday for the fourth time, according to Washington Parish Sheriff’s Office officials.

When WPSO deputies responded to a report of a suspicious person at a residence on Louisiana Highway 25, they encountered Woodward who was reportedly exhibiting bizarre behavior. As the deputies attempted to talk with him, Woodward began pacing and speaking incoherently, officials said.

Woodward reportedly refused all orders to comply and physically resisted the officers. He was subdued, restrained and placed under arrest. After he was subdued, officers reportedly discovered he was in possession of a quantity of illegal drugs and drug paraphernalia. In addition, the truck he was driving displayed a license plate registered to an entirely different vehicle, officials said.

“(Woodward) was too disoriented to carry on a conversation with deputies,” Washington Parish Sheriff Randy Seal said. “Yet, he was driving on a parish highway, potentially endangering the safety of other motorists. I congratulate our fine officers for taking him into custody and getting him off of our roadway.”