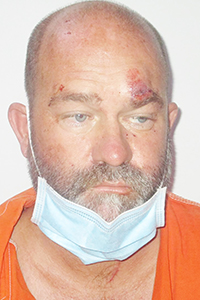 Holmes was booked into the jail on charges of third offense-driving while intoxicated, resisting a law enforcement officer with force or violence, resisting arrest by flight and several traffic offenses.

Haley said that the incident began when a WPSO patrol deputy observed a vehicle with a Mississippi license plate stopped in the traffic lane of Louisiana Highway 62 near Louisiana Highway 436 in Pine. As the deputy pulled in behind the vehicle, the driver reportedly sped away and turned on Louisiana Highway 439, refusing to stop. As the deputy pursued the vehicle, another deputy responded and both attempted several times to stop the fleeing vehicle utilizing sirens and blue lights. The vehicle eventually stopped after one of the deputies pulled his cruiser in front while the other deputy blocked from behind.

Haley said that the driver refused to exit his vehicle and attempted to pull around the deputy’s car. He was prevented from doing so and continued to refuse to exit his vehicle. After several verbal commands were ignored, deputies were able to pull Holmes from his vehicle. Holmes then reportedly began to fight violently with deputies until he was subdued. At that time, he was handcuffed and Northshore EMS was called to the scene.

Northshore personnel treated Holmes at the scene and then transported him to Riverside Medical Center for further medical treatment, Haley said. A deputy accompanied the ambulance to the hospital. Once Holmes was treated and medically cleared, the deputy transported the intoxicated Holmes to jail.

“This incident had all the elements of a potentially bad experience for our officers,” Washington Parish Sheriff Randy Seal said. “An intoxicated and combative man, a fleeing vehicle driven by the same inebriated man and a dark rural road combined to create the potential for a bad outcome. I am never pleased when anyone assaults one of our officers, but I am always pleased when our officers are not harmed and the bad guy is safely housed in our jail.

“I appreciate our fine officers who handled a precarious situation in a professional manner. This is but one example of what our officers often have to deal with while law-abiding citizens are home and sleeping.”