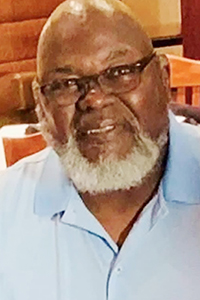 Our loving and wonderful husband, father, grandfather and friend and mentor, Larry Carl Watterson Sr. (affectionately known as “True Blue”), passed away Saturday, Aug. 21, 2021, at Slidell Memorial Hospital at the age of 69. He was the cherished patriarch of our family, guiding us, protecting us, teaching us, loving and supporting us. He was always there for his family as well as everyone in the community. He was a role model and hero, the pride and love he had for his family were immeasurable. He was a devoted friend to many and will be sorely missed and remembered by his community and abroad forever.

Larry was the seventh-born child of 14 to the late Artheria Watterson, born in Bogalusa. He received his education at Central Memorial High and Bogalusa High School, where he graduated in 1970.

His determination to succeed in life started at an early age. In 1970, he and his wife moved to Bronx, New York, and later relocated to Bogalusa. He was employed by Crown Zellerbach, Gaylord and International Paper Mills in Bogalusa, where he retired as a millwright after 36 years of service.

He was a faithful, devoted member of Thirkield United Methodist Church where he served in many capacities. He has served as Sunday School superintendent and teacher. He was a member of the senior choir, church Trustee and a member of the finance committee.

Throughout the Washington Parish community, he was a valuable influence and cheerful giver. He was a supporter of many youth groups, clubs and organizations including Washington Men’s Club, President of BHS Athletic Boosters, President of the BHS class of 1970, Bogalusa Little League Supporter, Teen Summit Coordinator, What’s Next College Tour Supporter and Youth mentor. He was an avid Southern University traveling Jaguar and New Orleans Saints fan for many years.

Some of his favorite pastimes were spending time with his sister Jewel Marie while watching sports, the news, working in his yard, and enjoying his grandchildren.

Larry “Blue” met and married his high school sweetheart and the love of his life, Lazette Lucas Watterson of 52 years. Upon that union two children were born, Renee Watterson of Bogalusa, and Larry (Dawn) Watterson Jr. of Concord, N.C. His legacy shall be carried on through his seven grandchildren, Ryan (Gicanda), Rahard (Kyriel), Helaina, Ricardo, Ramero, Gavin and Landon; and three great-grandchildren that were also the joys of his life, Jayde, Ryleigh and Jaya.

A graveside service will be held Sunday, Aug. 29, at 10 a.m. at Duffy Memorial Garden, located on Lee’s Creek Road in Bogalusa. Cook Richmond Funeral Home of Bogalusa is in charge of arrangements.

There will be social distancing, and the wearing of masks will be required.

In lieu of flowers, the family is requesting that donations be made to: Larry C. Watterson Sr. Memorial Scholarship Fund, P.O. Box 873, Bogalusa, LA 70429. Due to COVID-19 restrictions and the safety of all family and friends, there will be no repast.

A memorial celebration will be held at a later date.

“May the work I’ve done speak for me.”