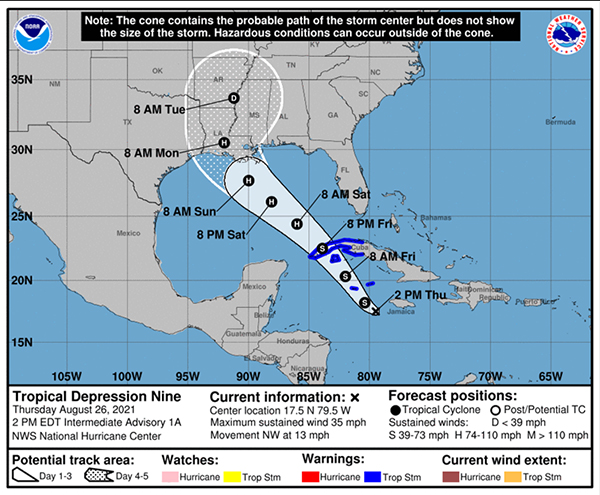 Officials said late Thursday morning that a storm system forming in the central Caribbean could affect Louisiana this weekend or early next week.

According to information from the Weather Forecast Office in New Orleans/Baton Rouge, the tropical disturbance called “Tropical Depression Nine” was located in the central Caribbean as of 10 a.m. Thursday. This system is expected to continue travelling northwest, entering the southeastern Gulf of Mexico late Friday and into early Saturday, with steady strengthening expected.

Officials said that there could be some “significant impacts” along portions of the northern Gulf coast starting Sunday evening.

A National Weather Service map showing a projected path suggests that Nine will strengthen into a hurricane by 8 a.m. Saturday. It could then make landfall along the Louisiana coast as soon as 8 a.m. Sunday.

As of Thursday at 10 a.m., the storm had maximum sustained wind of 35 mph and was moving northwest at 13 mph. It will likely strengthen into a tropical storm sometime Thursday.

Officials said that all citizens along the northern and western Gulf should continue to closely monitor this system. They urged citizens to ensure they have a plan in place, and to follow official sources for the latest updates on the storm.