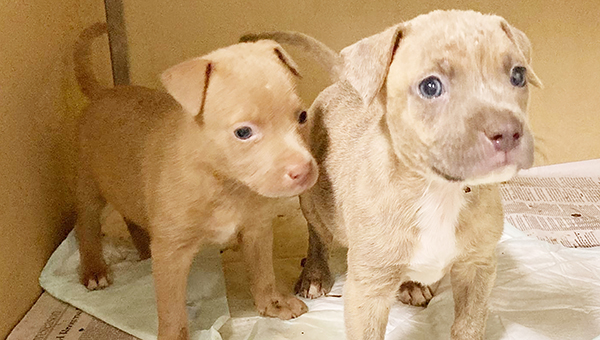 Shown above are two of the five puppies that were recently safely recovered from a well in Washington Parish.

Several members of the Humane Society of Louisiana (HSLA) rescue team spent three days in the searing August sun attempting to rescue five puppies that were stranded at the bottom of a 65-foot dry well.

The owner of the property contacted the Washington Parish Fire Department on Sunday, Aug. 15, and informed them that several puppies apparently had fallen into the well and needed to be rescued. The fire department contacted HSLA, which quickly formed a rescue team that was composed of two mother and daughter duos that included Tiffany and Sophia Smith and Monique and Abby McCullough, who also belong to the Mississippi Animal Project, another rescue organization that operates nearby. They were joined by Brandy Schmid and Jessica Cameron of the Humane Society and firemen from the Third District Fire Department, located in Franklinton, and Washington Parish deputies.

Because the opening of the well was so narrow, they had to design and improvise the tools they could use. The small opening of the well would not allow them to lower traps or platforms so they had to tie leashes together that were secured at the end of the rope to form a type of webbing. They enticed the puppies to walk on the webbing by placing food in the middle of it. As soon as the puppies walked on the webbing to reach the food, the rescuers pulled up the rope and the leashes gently closed around them. The leashes acted as a harness that allowed the rescuers to pull the puppies up the 65-foot shaft to safety.

Team members spent three days at the site, lowering the rope down the narrow well shaft and pulling one up at a time. The last puppy took the longest, but eventually, all five were pulled from the well and immediately comforted and given water. The momma dog was also on the scene, anxious about her puppies, and she was rescued as well.

The puppies were later transported to Mandeville Animal Hospital (MAH), where they are being treated for intestinal parasites and diarrhea. The vet clinic is also treating a few puppies who had minor skin issues. Overall, the puppies were surprisingly in good health. According to MAH, the puppies have good appetites and are eating solid foods soaked in broth.

As soon as the puppies are healthy enough to be released, they will be transported north to the Humane Society’s no-kill partners, where they are expected to be adopted to great homes. The puppies have gained a large following on social media, and the video of some of them being rescued has been viewed thousands of times on Tik Tok and other social media platforms.

“We felt hopeless and felt this was an impossible task but we could not just give up and not try. We are relieved and overjoyed at the outcome,” said Jessica Cameron, Director of Animal Services for the Humane Society.

“In my 33 years of work in this field, I’ve never seen a rescue operation quite like this one,” said HSLA Director Jeff Dorson. “There were so many obstacles to overcome, but the rescuers never gave up and succeeded against difficult and long odds. I could not be prouder or more grateful for their efforts.”

The Humane Society expects that the puppies’ medical care, boarding, and transport fees will cost more than $1,000. Those interested in donating to their recovery can contribute online through the Humane Society’s website at www.humanela.org, under donate, or through PayPal at humanela@gmail.com. Donations can also be mailed to HSLA, P.O. Box 740321, New Orleans, LA 70174. All donations are tax-deductible.

The Humane Society of Louisiana is one of the largest animal advocacy organizations in the state and operates the Enoch J. Donaldson Animal Sanctuary in Mt. Hermon. For more information, please visit its website at www.humanela.org or its page on Facebook at www.facebook.com/HumaneLA.