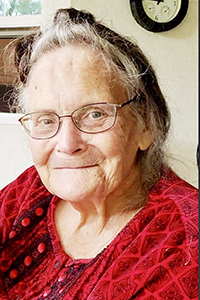 Visitation was held from 1 p.m. until the time of service on Tuesday, Aug. 24, at the funeral home.

Bessie was born on May 12, 1931, in Lecompte, to the late Archie Brady and Lena Ballard Brady. She later married Calvin McMahon Sr., of DeRidder, and relocated to San Diego, Calif., while he was serving in the U.S. Navy.

They later returned to Louisiana to start a family. Bessie proudly raised seven children. She devoted all her time and efforts to her family, as a housewife and mother, providing inspiration to those who knew her.

Bessie enjoyed gardening, cooking and quilting. She lovingly made her children and grandchildren hand-stitched quilts over the course of many years. And every Christmas, she would pour endless hours of love into making homemade fudge to mail to every child and their families.

To extend online notes of condolence to the McMahon service, visit online at www.kramerfunerals.com.