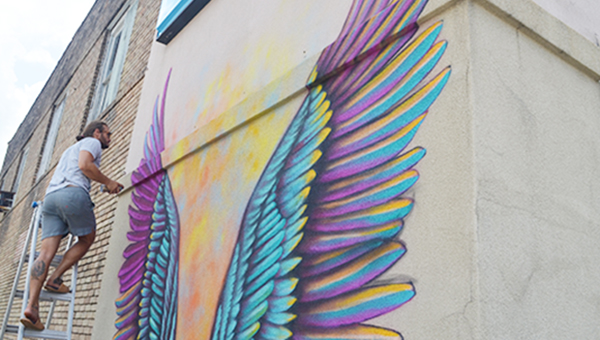 Artist Zac Maras works on a mural in Bogalusa on Thursday. The mural is now complete, and citizens are encouraged to take their photos in front of it.

Motorists on South Columbia Street recently have likely noticed the colorful new mural on the north-facing side of the Bourne building, at the intersection of South Columbia and East Third streets.

They may not be aware, however, that the mural is designed to be more than just an attractive sight.

The Bogalusa Historic Cultural District council recently began a “mural initiative,” and the purpose of the project is to encourage both beautification and community spirit. The first mural shows colorful phoenix wings. The phoenix is a mythological creature that literally was reborn by rising from the ashes of its previous burned form.

In the same way, the council members are hoping that Bogalusa will be transformed into a vibrant city once again, according to Wendy Dupont Williams. Williams is the executive director of Bogalusa Rebirth, which serves as community liaison for the Bogalusa Historic Cultural District.

“We thought it would be a great way to bring some positive energy to this part of the city,” Williams said. “We think it’s a great addition, and we’re excited that it’s been completed in time for our street fair that’s scheduled for October.”

The mural is also designed to be interactive. Citizens are invited to stop by and take a photo in front of the mural, and then use the hashtags “#BogalusaRebirth” or “#BogalusaPhoenix” in their social media posts, to make it easy to search for all of the photos of Bogalusa pride.

Williams said that the council hopes to paint additional murals in the future. She thanked building property owners Ramie and Suzi Bourne for allowing the art project to be done.

The mural artist is Zac Maras, 32, of Abita Springs, who grew up and attended school in Franklinton.

Maras said that he completed an initial sketch on paper and showed it to the cultural district’s council. After receiving their approval, he recreated the mural over the course of several days last week.

Maras said that he enjoyed talking with citizens who saw him working on the painting, and also appreciated receiving encouraging honks from passing motorists.

“That’s my favorite part about doing outdoor, public projects like this,” Maras said Thursday, as he was working to complete the mural before an expected rainfall. “It’s fun to talk to people as they pass by. You can tell they’re excited about what it’s going to be.”

Maras has a number of similar mural projects in the city of New Orleans and the Northshore. He is active on Instagram and Facebook and other social media.

The mural initiative fund is also taking tax-deductible donations. They can be mailed to Bogalusa Rebirth, 305 Ave. B, Suite 111, Bogalusa LA 70427.