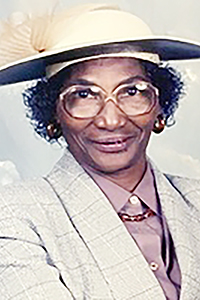 Rita Tate was born on Oct. 2, 1934, to Ike and Louise Ploughman of Angie. She received her education in Angie.

From an early age, Rita raised her sisters Mary and Deane after the passing of their mother. She had two sons, James Earl and Oscar Lee. She raised her niece Ruth Peters, great-nephew Alex Peters and great-niece Cynthia Peters-Curtain as her own and was the caregiver for Jasmine and La Damien as well. She cared for her granddaughters Nicole, Sonya and Renee each summer.

She was married to Eugene Tate and they served under the leadership of the Rev. Lynwood Bolton at Center Baptist Church. Rita proudly served as an usher and choir member.

She worked for the Pittman family and was also employed by the Angie School District.

She was known for her famous canned pears and figs.

The drive-through viewing will be Friday, Aug. 20, from 6 p.m. until 8 p.m. at Crain and Sons Funeral Home in Bogalusa.

The funeral service will be Saturday, Aug. 21, at 10 a.m. at Crain and Sons Funeral Home in Bogalusa. Interment will be at the Robinson Cemetery in Varnado.