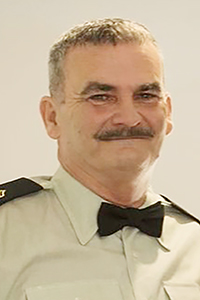 On Aug. 11, 2021, Mr. Bradley Pierce, Sr., 61, passed away in Bogalusa at Our Lady of the Angels Hospital. He served in the U.S. Army Reserve for 20 years and at Rayburn Correctional Facility for 20 years, retiring as captain. During his time with the U.S. Army, he served a tour in Desert Storm. Mr. Pierce loved being with his family and enjoyed the outdoors.

Mr. Pierce was preceded in death by a daughter, Felicia Ann Pierce Hillhouse; and his parents, Eli Pierce and Lorena Miley.

Relatives and friends of the family attended a visitation on Sunday, Aug. 15, from 5 p.m. until 9 p.m. Services were held on Monday, Aug. 16, at 11 a.m. at Brown McGehee Funeral Home in Bogalusa. Interment immediately followed at Lon Miley Cemetery in Varnado.