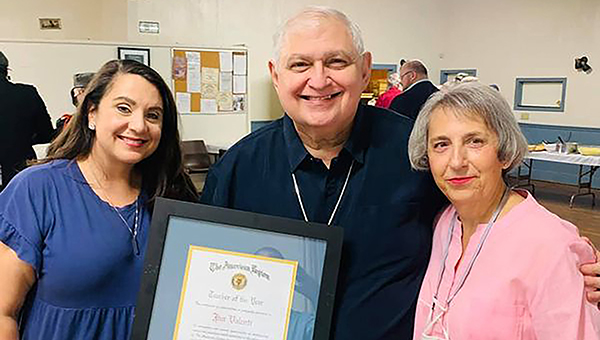 Annunciation Catholic School has named Jim Valenti its 2020-21 Teacher of the Year.

Valenti, whose nickname is “Mr. V,” was presented the award at an American Legion Post 24 ceremony and dinner Monday.

“I was very surprised,” Valenti said. “I was not expecting that. At first, I didn’t know what to think. I deeply appreciate the people who recognized me and I thank them.”

Valenti retired after teaching for 38 years, which were all at Annunciation Catholic School. Valenti taught religious education to pre-K to seventh graders.

In religious education, he is a catechist. His goal is to form his students in Christ.

“The accomplishment I see is the children growing in their relationship with God and living it with their family and friends,” Valenti said. “In a Catholic School, our school has students of various religious backgrounds and they’re all welcome. They’re all one family.”

Valenti said he really enjoyed working with students and their families.

“We have a terrific school,” Valenti said. “It is known for giving a great foundation to our students and they have been successful as they go through life in all different fields they were called into.”

Outside of school, Valenti is also highly involved with Annunciation Catholic Church in Bogalusa.

He has been involved in the parish religious programs for students who are Catholic who don’t attend a Catholic school. Valenti is also involved in sacramental prep, which means he prepares the candidates for the sacraments — Baptism, First Confession, First Communion and Confirmation.

Valenti has also done some RCIA (Rite of Christian of Initiation of Adults) at Annunciation Catholic Church.

RCIA is for people who are looking into the possibility of converting to Catholicism and joining the church. Church members like Valenti meet with the potential converts and try to help them understand if the church is for them or not.