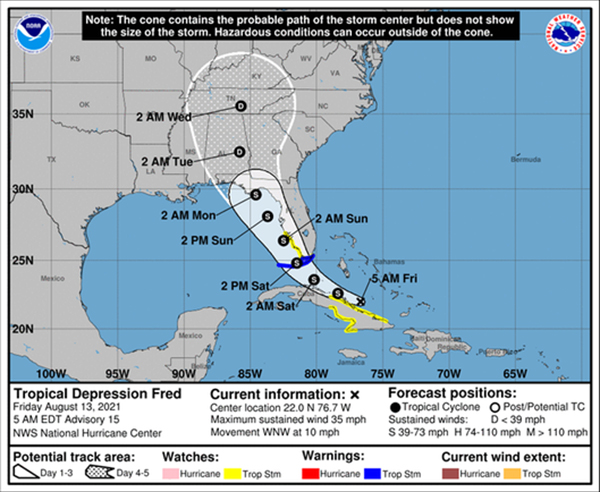 The National Weather Service said Friday morning that Tropical Depression Fred will likely increase in intensity to a tropical storm by the time it makes landfall east of Louisiana.

According to NWS officials in the New Orleans/Baton Rouge Weather Forecast Office, Tropical Depression Fred “remained disorganized” as of Friday morning, just to the north of the coast of central Cuba. Officials said that Fred is expected to continue northwest, and could slowly strengthen as the system enters the far eastern Gulf this weekend, potentially impacting portions of the Florida Panhandle early next week.

As of Friday morning, Fred’s highest recorded sustained winds were 35 mph. Its most recent movement was west-northwest at 10 mph. It was expected to strengthen into a tropical storm either later Friday or by Saturday morning.

Although the most recent track showed Fred avoiding most of Louisiana, NWS noted that forecasts are always changing. They urged citizens to continue to monitor the forecast for this system, and to be sure they are getting their information from reliable sources.