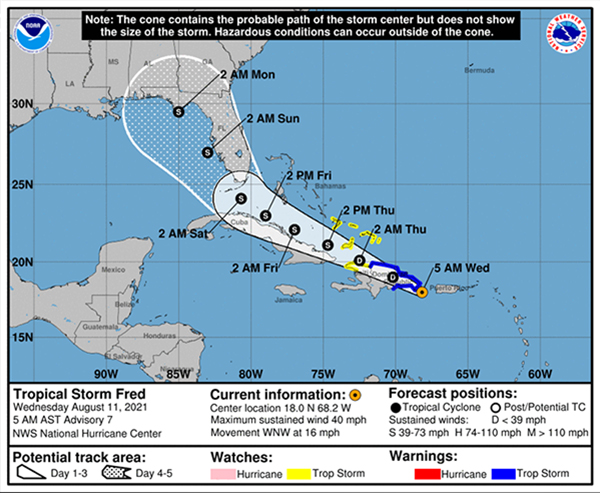 The National Weather Service said Wednesday morning that it is keeping an eye on the formation of Tropical Storm Fred in the southern Atlantic Ocean.

According to NWS officials in the New Orleans/Baton Rouge Weather Forecast office, as of 5 a.m. Wednesday, Tropical Storm Fred was moving west-northwest at 16 mph.

Officials said that there were no major changes to the forecast track, as the system would continue moving west-northwest, impacting portions of the Lesser and Greater Antilles. It was then expected to turn more northwest, and could enter the southeastern Gulf of Mexico in the coming weekend.

Officials said it was still too soon to know whether this system would have any impact on the northern Gulf Coast region. They urged citizens to continue to monitor the forecast for the system, and reminded them it is less than one month from the peak of the hurricane season and it is a good idea to review hurricane plans.