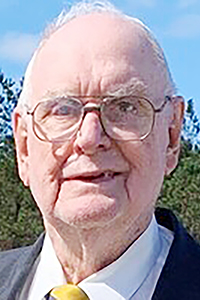 Quitmon Landrum, a resident of Bogalusa, departed this life in the arms of our Savior on Aug. 6, 2021, at the age of 90.

Quitmon was a Bogalusa High School graduate. He was a Veteran of the Korean War, serving the U.S. Navy from 1950 to 1954. He was also employed at the paper mill and retired from the State of Louisiana as a prison guard.

Quitmon was a loving family man and enjoyed being with his family and friends, always helping people in his church and community. He especially loved spending time with his children, grandchildren, and great grandchildren. While serving faithfully he loved doing missionary work. Quitmon and his loving wife Maxine Keaton Landrum of 65 years, as members of The Church of Jesus Christ of Latter-Day Saints, were sealed for time and all eternity in the Mesa, Arizona Temple on July 14, 1964.

Visitation will be held Saturday, Aug. 14, from 11 a.m. until time for the services at 1 p.m. in the Poole-Ritchie Funeral Home Chapel with Branch President Randy Helm officiating the services. Interment will follow at Keaton Cemetery in Angie.