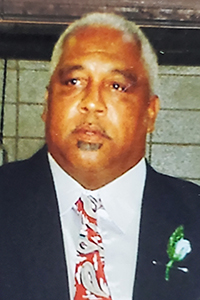 Elmo Anthony Flot Jr., 68, a resident of Bogalusa, departed his physical life and joined his Lord and Savior on Thursday, Aug. 5, 2021, at St. Joseph Hospice Carpenter House in Harahan.

He was preceded in death by his paternal and maternal grandparents; his mother, Ola Mae Flot; father, Elmo Flot Sr.; brothers, Tyronne and Karial; sisters, Cheioquito and Gwen; and a son-in-love, Derrick.

A drive-through viewing will be on Wednesday, Aug. 11, from 4 p.m. until 6 p.m. at Crain and Sons Funeral Home in Bogalusa.

A graveside service will be Thursday, Aug. 12, at Bogalusa Cemetery with the Rev. Willie Gauthier, pastor.