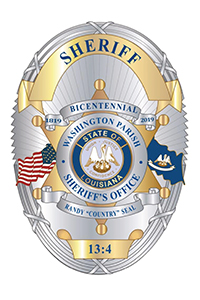 A juvenile suspect is being sought in connection with a murder earlier this month, according to Chief Criminal Deputy Mike Haley of the Washington Parish Sheriff’s Office.

On Saturday, July 10, the WPSO responded to a report of a deceased person lying in the roadway on Mary Topps Road east of the Clifton community, Haley said. Upon arrival at the scene, officers discovered the body of Justin Brumfield, 40, a resident of Vernon School Road.

Haley said that detectives were called to the scene and began an investigation, which determined that the victim had been in an altercation earlier with another person, both of whom were armed. During the altercation, Brumfield was fatally shot. The shooter, identified as a juvenile, fled the scene and is being sought on a warrant for second-degree homicide, Haley said.

Due to the wanted person being a juvenile, no additional identifying information will be released. However, any person with information concerning the crime is asked to contact Capt. Tom Anderson at 985-661-2024.

“A senseless loss of life is always tragic,” Washington Parish Sheriff Randy Seal. “Although the juvenile has no previous criminal record, he has committed a serious crime and it is important that he be found. I extend my sincere condolences to Mr. Brumfield’s family and assure them we are working diligently to locate and arrest the shooter.”