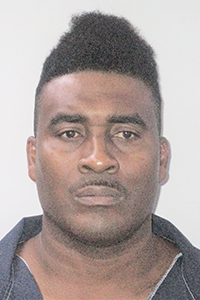 On July 12, a Washington Parish Sheriff’s Office patrol sergeant was working on Mt. Pleasant Road south of Bogalusa when he observed an eastbound speeding vehicle. He stopped the vehicle and immediately noticed the distinct odor of marijuana, according to WPSO Chief Criminal Deputy Mike Haley.

Haley said that the female driver denied smoking marijuana, but her male passenger confessed he had recently done so. The driver then reportedly granted permission for the deputy to search her vehicle and he found the passenger to be in possession of numerous Suboxone strips, which were concealed in a cigarette pack. Also discovered in the passenger’s possession were a set of scales commonly used to weigh illegal narcotics and a pistol that was determined to be stolen from the state of Alaska, Haley said.

Haley said that Abram, a convicted felon, has previous arrests in Washington Parish. He was jailed in 2015 for violating the terms of his parole. In 2018, he was arrested again for possession with intent to distribute schedule one narcotics, possession of schedule two narcotics, introduction of contraband, being a fugitive and traffic offenses. Later in 2018, he was remanded to jail by the 22nd Judicial District Court. In 2020, he was arrested for possession with intent to distribute heroin and other illegal drugs, possession of drug paraphernalia, probation and parole violation and traffic offenses.

“Mr. Abram seems to like the Washington Parish Jail,” Washington Parish Sheriff Randy Seal said. “He certainly has been here often enough. This was a good traffic stop resulting in the seizure of illegal drugs and the recovery of a stolen pistol.”