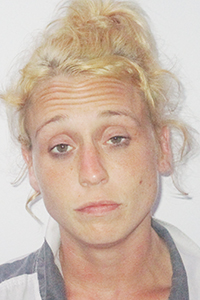 On Friday, a Washington Parish Sheriff’s Office patrol deputy was dispatched to Louisiana Highway 21 north of Bogalusa, in reference to a female creating a disturbance, according to WPSO Chief Criminal Deputy Mike Haley.

Once the officer encountered the female, she resisted arrest before being restrained, Haley said. He added that when the officer asked for her name and identification, she provided a false name. Later, while being booked into jail, she again reportedly resisted officers and had to be physically restrained.

Haley said that since she refused to give her name and other identifying information, she was booked into the jail under the alias “Jane Doe.” Once she was fingerprinted and her fingerprints were submitted to the criminal justice database, her true identity was revealed. Her actual name is Nicole Ann Currie, 33, a resident of Livingston Parish, Haley said.

Currie was booked into the Washington Parish Jail charged with criminal trespass, possession of illegal drugs and three counts of resisting an officer. She has no previous arrest record in Washington Parish, Haley said.

“This was a strange situation,” Washington Parish Sheriff Randy Seal said. “Her refusal to identify herself certainly did not keep her from going to jail. Little did she know her fingerprints would quickly identify her once they were submitted to the criminal justice database.

Most likely, she had a previous arrest somewhere else. I am glad the identity issue was resolved. Although such a situation is unusual, it is not unheard of. The Washington Parish Jail has not had a previous ‘Jane Doe’ inmate, but has had ‘John Doe’ inmates on three previous occasions — one in 2008 and two in 2019.”