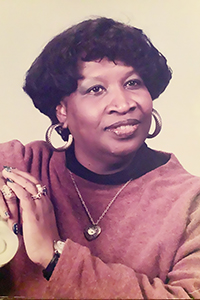 “Without God we can do nothing, without HIM we would fail. Without God we can do nothing, just like a ship without a sail.” These words encompass the Journey of Revered Fannie Amelia Otis Thompson. Her parents introduced her to God as an infant and she spent her life cultivating a relationship with HIM. As a young child Fannie participated in Easter Programs, Christmas activities and was always in faithful attendance at Sunday School and Church Services. She would often tell her daughters of her first memorable performance as a preschooler here at Thirkield. Her line was “I don’t know what you’ve come to do, but I’ve come to say Happy Easter Day.” To know her is to understand how she shared this line with us, through her unique conviction, confidence, enthusiasm and style.

Fannie spent decades as a Sunday school student, Sunday teacher, or Sunday school director in various church homes, but primarily her membership resided here a Thirkield United Methodist Church or at Hartzell United Methodist Church in New Orleans, Louisiana. When they were not able to travel to Thirkield she and Edward would attend Liberty Missionary Baptist Church in Liberty, Mississippi where they are considered honorary members.

In the midst of her life-long service to God, she graduated from Central Memorial High School in Bogalusa, Class of 1961. She continued her educational journey when she attended or received certificates or degrees from Grambling State University, Delgado Community College in New Orleans and William Carey course of study program in Jackson, Mississippi. Through her diligent work she became a certified beautician, a para educator and a minister.

Fannie lived a very fruitful life. She was a member of several choir groups, president of the Para Educators Union in New Orleans, and a member of the Traveling Rebbelers Social Club. Additionally, she led the way supporting and guiding her children in many of their interest. During their upbringing, she spent several years as president of the Parent Teacher Organization. She was their 4H, Brownie and Girl Scout troupe leaders and was always willing to lend a hand with their sports, band and dance team activities.

After Hurricane Katrina when she and her husband, Edward, moved to Liberty, Mississippi, she continued to broaden her social and educational horizons. Fannie was a vital member Ester Chapter #34 Order of the Eastern Star where she served as Chaplin. She also was a member of Mississippi State University Extension Homemaker Volunteer’s where she served as chaplain, and active part of the Senior Missionary Society at Liberty Missionary Baptist Church, and an active member of Southwest Mississippi Community College Institute for Learning in Retirement. Those who knew her well understood that no matter what role she embraced she was determined to do it well.

Many consider themselves blessed to have known and loved Fannie for the past 79 years. We will miss her company, advice, conversations and her smile. She leaves behind many who cherish their time with her including her husband for over fifty years, Edward D. Thompson, her daughter, Brigget Thompson Davis (Ronnie) – Smryna, Tennessee, siblings Yvonne Romella Otis Wilson- Los Angeles, California, Marvel Otis Le’Gare – Springfield, Massachusetts, Amos Young, Jr. (Jean) – Bogalusa, Louisiana, son-in-law Isaiah Johnson, Sr. – Baton Rouge, Louisiana, sons in heart Aaron M. Thompson and Edward M. Thompson, her grandchildren Brandon, Isaiah, Julian, Shavetta and Reide, great grandchildren Elijah and Brandon Jr., God children, sisters-in-laws, brothers-in-laws, nieces, nephews and many other relatives and friends who are beter off because of her love and influence.

Funeral service will be held on Saturday June 26, at 10:30 a.m. at Thirkield U.M.C. Visitation will begin at 9 a.m. until time of service. Rev. Nolan Robinson officiating.

Cook-Richmond Funeral Home is in charge of arrangements. You may sign our guestbook at www.cookrichmondfuneralhome.com.