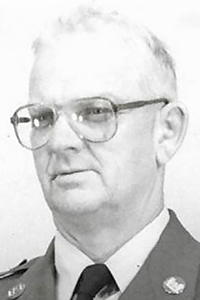 Daniel Passman, 83, a resident of Bonner Creek, passed away Sunday, June 20, 2021, at his home. He was a member of Grace Baptist Church of Folsom and later was a member of Acy’s Creek Missionary Baptist Church. Danny served 34 years in the Louisiana Army National Guard and retired as a full time employee with the rank of Staff Sergeant. He worked for 18 years with the forestry industry. Danny was a firefighter with the Bonner Creek Volunteer Fire Department and also served on the board of Commissioners for the Washington Parish Fire District #1.

He is survived by his wife, Elaine Sharp Passman; and son and daughter-in-law, David and Laquetta Passman.

He was preceded in death by his daughter, Mary E. “Beth” Passman; his parents, Joe P. and Zula Stafford Passman; and grandparents, Steve and Della Stafford and Pierson and Ophelia Passman.

Visitation will be at Crain Funeral Home on Wednesday, June 23, from 5 p.m. until 8 p.m. and after 9 a.m. on Thursday, June 24. A funeral service will be held at 11 a.m. Thursday, June 24, in the funeral home chapel, with Bro. Mark Graham, Bro. Gary Planchard and Bro. Donnie Broome officiating. Burial will follow in the Spencer Cemetery.

In lieu of flowers, the family prefers donations to the American Kidney Fund.