American Legion’s ‘4th of July’ parade will return in 2021 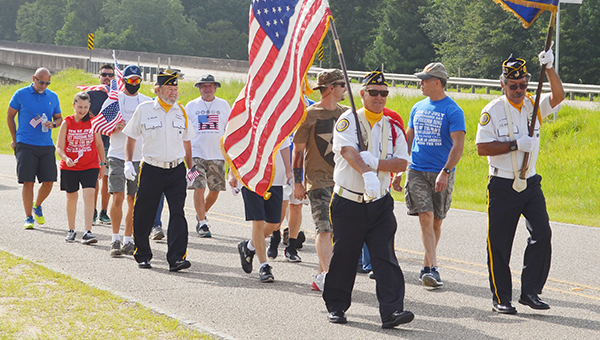 Citizens participated in a smaller-scale “Freedom March” in July of 2020, during the midst of the COVID-19 pandemic. This year, the traditional Fourth of July parade will return in its entirety.

Magic City Post 24 of the American Legion is happy to announce that the traditional Independence Day celebration and festivities will be resumed this July.

Bogalusa will have a complete and dignified observance of Independence Day, beginning with the selection of the Paper Queen and her Court and then their presentation on the evening of Friday, July 2, at 7 p.m. The observance will continue throughout Saturday, July 3, with a parade at 10 a.m. that will be open to all, at no charge. It will be held on the standard parade route.

The parade will be followed by a luncheon at the Veterans’ Memorial Hall for parade participants and families. The celebration will end at dusk by illuminating the skies above with fireworks — soaring and sparkling testimonials of our allegiance and joy.

This year’s celebration is dedicated, appropriately, to the First Responders, who, since early 2020, have taken the lead in organizing, enlightening, and patiently providing care for America’s population in response to this plague of COVID-19. Its sudden impact, in ways almost analogous to Pearl Harbor and 9/11, could only be resisted by quick, concerted and innovative action.

A little known but overwhelmingly necessary part in this response in Louisiana was carried out by our Louisiana National Guard, through its 139th Regional Support Group, under the very competent command of Col. Willis Hall. The unit was quickly positioned in Baton Rouge, with a fleet of military vehicles capable of delivering medical equipment and food supplies throughout Louisiana.

Col. Whit Gallaspy, a member of Post 24, was being treated to a retirement party on a Saturday early in 2020, after multiple deployments to the Middle East over 29 years of service, when he received an order reactivating him and instructing him to report promptly to the 139th as its medical officer. Gallaspy, a military historian, marvels at this army unit’s training and efficient response to this crisis. Hospitals all over Louisiana were either without or running out of ventilators and other equipment, and patients were either frantically hanging on or expiring.

He compares these well-trained troopers’ responses to that of the Colonial Army’s Minutemen, who area remembered for having been able, in a minute’s time, to prime their muskets and present themselves in a military stance.

The unit has, as of the time of this writing, delivered 59.5 million items of PPE (personal protective equipment) to hospitals, physicians and other centers of treatment and defense, and has delivered 30.4 million pounds of packaged supplies to food banks in Louisiana.

It is still functioning, with a cadre of approximately 922. Gallaspy served as the physician for the guardsmen, who were constantly vulnerable to the virus, and he trained and coordinated them in administering the tests and vaccines. As of this writing, approximately 375,827 tests for COVID-19, together with 73,509 shots of vaccines, have been given by the medical personnel of the 139th at its eight state-wide treatment centers.

Our appreciation and thanks are extended with equal ardor and enthusiasm to the hundreds of other nurses, doctors and technicians who have joined in this endeavor, and labored to help us all to find our way through this pandemic. You are all “first responders” and deserve our salutes.

Fourth of July T-shirts have been designed and are being made available by the American Legion and by the 40 and 8, at a cost of $20 per shirt, which will assist in defraying the cost of this celebration. A likeness of the 1949 Chevrolet pick-up truck, one of GMC’s post-war stars which is now sought as a collector’s item, appears on the shirt, together with the figure of a family dog, the personification of loyalty, with the Stars and Stripes waving about these symbols.

Legion spokesmen comment that America’s concept of freedom resonates from colonial times, especially the formative years between 1776 and 1789, as articulated by the pens of Thomas Jefferson and James Madison, and their message was echoed in following years by Abraham Lincoln, Thomas and Franklin Roosevelt, and other patriots of their faith. We are all its beneficiaries and its stewards and we must recognize that it is our task to see that this ideal is neither seized nor silently siphoned away from our offspring.

The Fourth of July symbolizes this gift of liberty and has been declared by Congress to be America’s point day of celebration. Let us remember this with continuing faith and on this day give thanks for the Land of the Free and the Home of the Brave.

This article was written by John Gallaspy, for The Daily News.