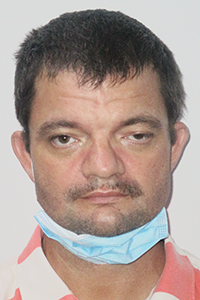 On Wednesday, June 16, a Washington Parish Sheriff’s Office deputy responded to a report of a car abandoned on the Pearl River Bridge east of Bogalusa and a male running eastbound across the bridge, according to WPSO Chief Deputy Mike Haley.

“When the deputy arrived on the scene, he discovered the abandoned car, then proceeded eastbound where he located the driver lying in the westbound lane of the portion of the highway located in Washington Parish as oncoming drivers swerved to avoid him,” Haley said. “(Howard) Seals (of Poplarville, Miss.) was in possession of heroin at the time and the deputy took Seals into custody.”

“Heroin is an illegal and highly addictive opioid drug,” Washington Parish Sheriff Randy Seal said. “A heroin overdose can cause coma and even death. Unfortunately, there is far too much of this terrible drug in Washington Parish.

“Those who ingest heroin and drive while impaired are a threat to every motorist they encounter. I am so pleased our deputy was able to locate Mr. Seals and transport him safely to jail.”