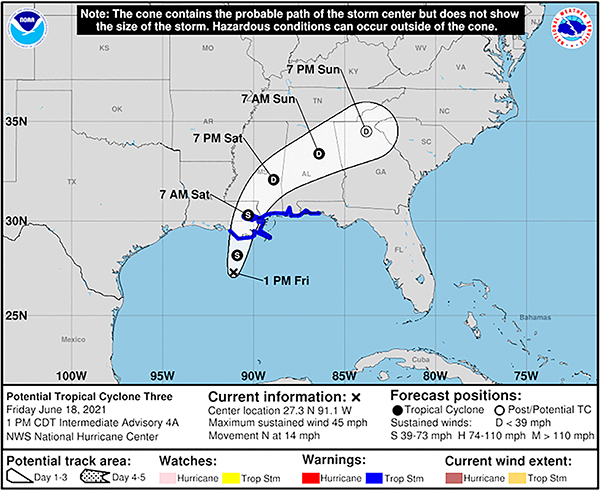 The first major rainfall event of the 2021 hurricane season was expected to hit Washington Parish this weekend, as local officials kept their eye Friday on what was then being called “Potential Tropical Cyclone Three.”

In its 1 p.m. Friday update, the National Weather Service in New Orleans said that the storm was about 250 miles south-southwest of New Orleans, with intensity of 35 mph and moving north-northeast at 14 mph.

The NWS said that rain bands were already moving on shore and winds were increasing over coastal waters, with numerous oil platforms seeing wind gusts up to 40 mph Friday morning.

Although there was no official Tropical Storm Warning for Washington Parish in that 1 p.m. update, there were warnings issued for parts of St. Tammany and Tangipahoa parishes.

The most pressing dangers from the storm system are potential for flooding rains and occasional tornadoes.

Louisiana Gov. John Bel Edwards issued a state of emergency on Thursday, in anticipation of the storm. In addition, several municipalities in Washington Parish offered citizens the chance to fill sandbags throughout the day Thursday and Friday.

The NWS’s weekend forecast for Bogalusa included the following: