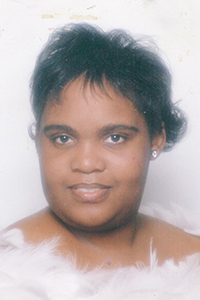 Natalia Patrice Holmes was born on March 2, 1983, to Mrs. Patricia Ann Holmes and Larry Ray Holmes Sr. of Franklinton. Natalia passed away on June 3, 2021, at the Tulane Medical Center in New Orleans.

Natalia was a resident of Franklinton.

She was preceded in death by her father, Larry Ray Holmes Sr.; her grandmother, Ora Lee Holmes; and grandfathers, J.D. Holmes and Roy H. Dyson.

The funeral service will be held on Saturday, June 19, at 1 p.m. at the Cook-Richmond Funeral Home Chapel in Franklinton. Visitation will begin at 10 a.m. and continue until the time of the service. The Rev. Antoine Graves will be officiating. Interment will be in the Magee Creek Missionary Baptist Church Cemetery.