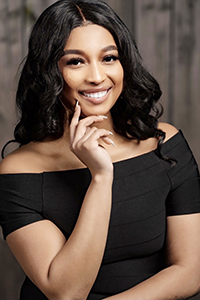 Diamond Sampson, a former resident of Bogalusa, is the current “Miss Slidell,” and this week will be competing for the title of Miss Louisiana in Monroe.

Sampson’s talent for the competition will be dancing, something she first began competitively as a 5-year-old at Dawn’s Dance Academy in Bogalusa. Her cousin, Kierra, is the owner of Ash Kay Performing Arts in Bogalusa.

Sampson has also previously been a member of the Sensational Stingettes at Alabama State University.

“I’ve been dancing for so long, but I wanted to switch gears a little,” Sampson said. “That’s why I started getting into pageants. I wanted to earn scholarship money and also help out my community.”

Sampson won the Miss Slidell competition in November of 2019, and would have been set to participate in Miss Louisiana in 2020. However, COVID-19 forced the cancellation of that event and Sampson has retained the Miss Slidell crown since.

This month, she is finally getting the chance to compete for the state title.

The competition began Tuesday with private interviews for each contestant. On Thursday, the pageant participants will have their talent performances, and Friday will be on-stage questions and the evening gown competition.

Saturday is the finals of the pageant. The night will start with 30 competitors, which will be later narrowed down to 10 and then a top five. One of those five will be crowned Miss Louisiana, and then move on to participate in the renowned Miss America pageant at the Mohegan Sun casino in Uncasville, Conn., in December.

Sampson said she believes the experience in the Miss Louisiana pageant will be life-changing, regardless of how she finishes.

“Mentally, I just want to have fun and make sure that I grow as a woman,” she said. “Everybody that I talk to, who has done a pageant like this before, they always say that they leave as a different person. I just want to be sure I’m reaching my true potential and bettering myself, throughout this process.”

Sampson noted that the winning Miss Louisiana is almost like starting a job. It is more than just a title. She said that the state winner serves as an ambassador for Louisiana, and is expected to attend numerous events and give numerous speeches.

“I’d have to move to Monroe, defer from school for a year, and focus on being Miss Louisiana,” she said. “It would be a challenge, but it would be exciting. I’d love to get the opportunity.”