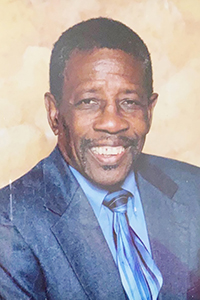 Elder Arthur Louis Thompson, a native of Franklinton, was born to the late Lenwood and Lydia Richardson Thompson on May 12, 1939. He transitioned on July 25, 2020, at his home in Beaumont, Texas.

Elder Thompson married the late Gail Davis and to this union three daughters were born.

Elder Thompson served in the U.S. Army. In 1976, he accepted the call to ministry and pastored multiple churches within the Southwestern Diocese of the Church of Christ Holiness, USA. His last pastoral assignment was at Christ Mission Temple, COCHUSA of Beaumont, Texas.

He applied his strong work ethic throughout his life as a Special Education Adaptive Physical Education Teacher (33 years), Driver’s Education Instructor, Football and Basketball Coach, Car Salesman, and a Walmart Associate. After retirement, he served as a Substitute Teacher for over a decade with the Beaumont Independent School District.

He leaves to cherish his memories: his children, Lequisha Thompson of New Orleans, Garrious Barker of Franklinton, LaTroy Thompson and Toya (Luke) Davis, both of Baton Rouge, and Imana Thompson of Beaumont; eight grandchildren; nine great-grandchildren; three great-great-grandchildren; one brother, Elder Dr. Lenward Thompson; sisters-in-law, Doris Thompson, Cora Brumfield and Nicy Davis, both of Franklinton, and Shirley Ann Davis of Hammond; and a host of nieces, nephews, relatives and friends.

He was preceded in death by his loving wife, Gail D. Thompson, mother, father, four brothers, one sister, and two grandsons.