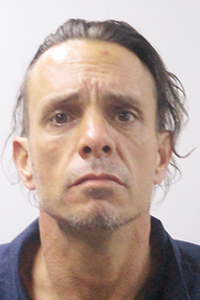 On Monday, Washington Parish Sheriff’s Office deputies responded to a report of aggravated assault at a residence west of Franklinton.

Upon arrival at the scene, deputies learned that Justin Ratcliff, 42, a resident of Gibson Road in McComb, Miss., had threatened to shoot a resident with a shotgun, according to WPSO Chief Deputy Mike Haley. Children were reportedly present when the threat was made.

Haley said that deputies searched the area for Ratcliff and discovered him walking nearby.

He was taken into custody without incident and booked in the Washington Parish Jail on charges of domestic abuse aggravated assault, two counts of child endangerment and possession of stolen property.

“Domestic incidents often result in harm to one or more persons involved,” Washington Parish Sheriff Randy Seal said. “Thankfully, no one was harmed this time. I appreciate the quick response of our deputies and the apprehension of Mr. Ratcliff.”