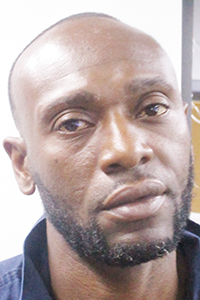 On Monday, Washington Parish Sheriff’s Office deputies responded to a report of a business theft northwest of Franklinton.

Arriving on the scene, deputies learned that a male suspect had attempted to steal items from the business, and then fled on foot when he was confronted, WPSO Chief Deputy Mike Haley said. Deputies then began to search the area for the suspect and encountered a disabled vehicle on the side of the road.

Haley said that the driver of the vehicle, Curtis Warren Jr., 42, a resident of Magee Drive, was uncooperative with officers and began backing away. When officers attempted to gain control of Warren, he physically resisted before being restrained, according to Haley. Deputies then reportedly learned that the vehicle had been stolen from a nearby residence.

Warren was arrested and transported to the Washington Parish Jail, where he was booked on charges of theft, theft of a motor vehicle and resisting arrest. Haley said that Warren has 11 documented arrests, beginning in 2006 when he was arrested for possession of illegal drugs with intent to distribute. Subsequent arrests since that time were for a multitude of charges, including illegal drug offenses, burglary, theft, failure to appear in court, probation violation and traffic offenses.

“Shoplifting affects not only the business, but also customers,” Washington Parish Sheriff Randy Seal said. “It seems he made at least two bad decisions. First, he attempted to steal from a business. Next, he stole a vehicle that had been parked due to major transmission issues. Let’s hope future decisions will be more positive.”