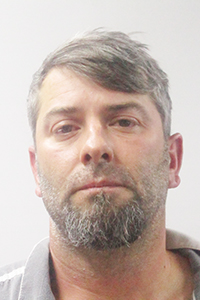 On Monday, a Washington Parish Sheriff’s Office patrol deputy responded to reports of a reckless driver on Louisiana Highway 10, near the Stoney Point area. WPSO Chief Deputy Mike Haley said that the patrol deputy was able to locate the vehicle being driven in a reckless manner and stopped the driver.

Haley said the officer encountered Timothy John Goss, 43, a resident of Washington St. in Franklinton. Goss, who had a pistol in his possession, was unable to successfully complete the roadside sobriety test and was arrested and transported to the Washington Parish Jail, Haley said.

Upon his arrival at the jail, Goss reportedly refused to take the breath intoxilyzer test and was booked into the jail on charges of fifth-offense driving while intoxicated, being a convicted felon in possession of a firearm, reckless operation of a motor vehicle and being a fugitive from the Louisiana Division of Probation and Parole for a fourth-offense driving while intoxicated conviction.

Haley said that Goss has one previous documented stay in the Washington Parish Jail. He was arrested in 2009 for driving while intoxicated, failure to appear in court and a traffic offense.

“It is always good to remove an intoxicated driver from our highways,” Washington Parish Sheriff Randy Seal said. “The life of every motorist is jeopardized when a drunk driver is on the road. Drink and drive and you are facing possible time in the parish jail. Drunk drivers don’t just get tickets. They also earn a free ride to jail.”