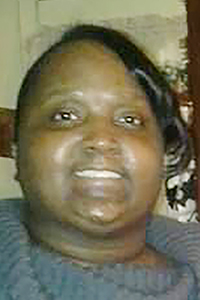 Samantha Marie Magee, daughter of Jeanette Jackson and the late Nathaniel Jackson, was born Oct. 13, 1979, at the Charity Hospital in Bogalusa.

She attended Bogalusa High School, where she graduated with the class of 1997. At an early age, she professed her faith in Jesus Christ at Browns Temple AOH Church of God. Samantha was known for always having such a calm sweet spirit, along with her welcoming smile.

She gained her heavenly wings on the morning of May 16, 2021, in Bogalusa, very peacefully at Our Lady of The Angels Hospital.

She was preceded in death by her father, Nathaniel Jackson; her two brothers, Keith and Terrance Magee; her uncles, Benjamin Jackson and Johnny Magee; and her aunts, Irene Baggett, Valarie Hammond and Diane Wilson.

Precious memories for a lifetime to cherish, we will miss your lovely smile and the love she showed to each and every one of us.

A memorial service will be held on Saturday, May 29, at 1 p.m. at Crain and Sons Funeral Home with Preacher Reginald Middleton from Gulfport, Miss.

A lifelong resident of Bogalusa, Yvonne Grace Malley Griffith went to heaven May 24, 2021. She was 93 years old.... read more