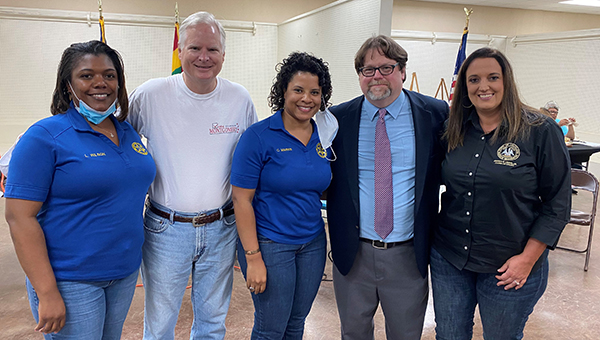 Nearly 100 people who had outstanding traffic or misdemeanor warrants for their arrest in Washington Parish were able to resolve those matters recently without going to jail through a “warrant clinic,” organized by District Attorney Warren Montgomery and four community groups.

“This was a wonderful example of our state and parish agencies working with the community for the good of the people,” Montgomery said. “Thanks to all of our volunteers, especially Judges Creel and Lobello, our community volunteers, and the staff members of Clerk of Court Johnny Crain, and Sheriff Randy Seal. We couldn’t have done this without their help.”

The idea for the clinic was brought to Montgomery last year by Community Organizer Anza Becnel, founder and executive director of GRAE (Growing Real Alternatives Everywhere), a Houston-based grassroots group that has traveled the region and helped to sponsor similar clinics. After a successful event in Covington last October, Montgomery worked again with GRAE, and local community groups—the Washington Parish NAACP, Brilliant Mindz, Inc., and COCO (Champions Of Change Organization)—to repeat the program in Franklinton.

Having the “warrant clinic” in a neutral location, like the fairgrounds, was part of the plan to show people who may have been afraid to come to court that officials were willing to work with them to resolve the warrants. To qualify for the clinic, participants had to have an outstanding warrant that did not involve a victim or property damage.

Before the clinic, participants faced the possibility of being arrested if a law enforcement official had stopped them for any reason and discovered that there was an outstanding warrant for their arrest. Misdemeanor and traffic warrants often are issued by a judge if a person does not show up for court or does not pay a fine that has been ordered by the court.

More than $4,200 in outstanding fines were collected at the event, and even more is expected to be brought in over the next couple of months from participants who were given more time to pay their fines. The judges also waived thousands in fees to make it easier for the participants to pay their debts.

GRAE is working with Bogalusa City Court and City Court Judge David Duke and the same local community groups to sponsor another upcoming warrant clinic only for people with outstanding warrants in the city of Bogalusa. The event will be held Saturday, May 22, from 10 a.m. to 2 p.m. outside Bogalusa City Hall, 202 Arkansas Ave. Registration in advance is required by texting the following information to 985-241-0037: Bogalusa City Court, Name, Date of Birth, Address, Phone Number. Participants will not be arrested.