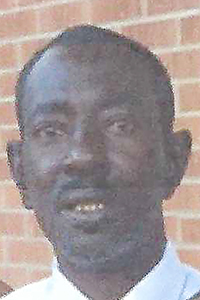 Final arrangements have been made for the late Devon Rowmara “Mellow” Cotton Sr. A visitation will be held at the New Zion Missionary Baptist Church, 63468 Jones Creek Road in Angie, on Saturday, May 8, from 11 a.m. until noon. The funeral service will begin promptly at noon. Cook Richmond & Sons Funeral Home, located at 638 Columbia St. in Bogalusa, is in charge of arrangements. Only immediate family will be allowed to attend the funeral service. Social distancing and masks are required.

Devon Rowmara Cotton Sr. was called home by the angel of the Lord on Monday, May 3, 2021. “Mellow,” as he was affectionately called by family and friends, was born on Oct. 31, 1966, to Bro. Glynn Cotton and the late Deaconess Sis. Dorothy Jean Cotton in Bogalusa.

He was faithful to attend Sunday church school, weekly Bible study, and was present each Sunday for morning worship service on a weekly basis until his death on Monday, May 3. Mellow could not wait for the church to open back up. When the church did open, who was one of the first to enter? Mellow. He was present for the parking-lot service since the pandemic began and the church was shut down in March of 2020. He was present at church on the first Sunday the doors of the church were opened, the first Sunday in May, and was looking good and actively praising and worshipping God and enjoying service. Mellow told someone just recently, that he was finally beginning to understand what Pastor Cotton has been teaching. Oh, what a joy in the Lord to get an understanding of the teaching of God’s holy word.

Mellow attended school in the Washington Parish School System. He graduated from Varnado High School in the class of 1986. He was elected by his senior class as the “most handsome.” Mellow played basketball for four consecutive years. He was a first-string point guard from his sophomore year until he graduated in 1986. He was an awesome basketball player.

Unfortunately, soon after high school, Mellow fell ill to kidney failure, which resulted in a lifetime of dialysis treatment that left him disabled for life. He was treated for dialysis for many years by his mom, Dorothy Jean Cotton.

Mellow had many things that he enjoyed with friends and family, but he loved car races and was a lover of dogs, especially pit bulls. He had two extraordinary friends who went to the end of the earth for him and with him. He loved Mario Cotton and Larry “Fred” Morris Jr. There were many others, but these two went an extra mile.

Mellow’s favorite colors were yellow and blue. He nicknamed all his children for reasons … Devionne was “Heavy Duty,” because she was so skinny, he used to make her make muscles to show her strength. He nicknamed Devon “Man-Man,” because he never crawled, he just rolled around all over the house to get to where he wanted to go, and one day he got up and started walking and that’s how he became his little “Man-Man.” He nicknamed Reshard “Hard,” because he was a fighter and hardheaded, just like him.

From elementary school throughout high school, he was loved and was the life of the party. Mellow was the best dancer, the most handsome, very athletic and was very big-big on f-a-m-i-l-y. And let us not forget that blue truck “Chevy Luv.” Mel was Mel, and no one could change that but Mel, with the help of God. He would speak his mind, but no matter what, he would step up to do anything he could possibly do whenever his children, grandchildren, family and his friends needed anything.

Mellow had many children who looked up to him as a father — Romelle Jefferson, LaQuinton Jefferson, DeVante Claiborne and Donte Carter. He will be forever loved and remembered by his favorite phrase and sadly missed by many.