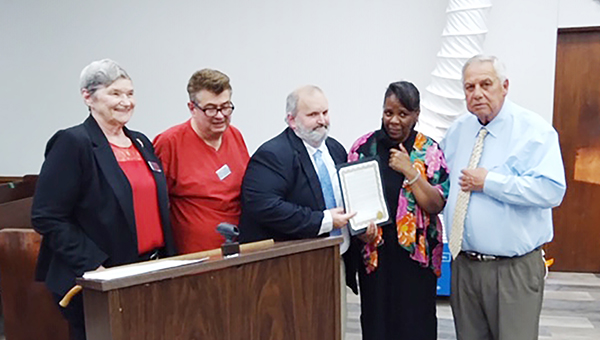 At the Monday, April 26, meeting of the Washington Parish Council, Patrick Hamby from Entergy gave an update on the progress of mitigating sound at their power plant west of Bogalusa. The modifications are on track for August through early September. Hamby said that they believe it should lower the sound to the 45-55 decibel range. Perry Mickenheim, a resident from the area, is scheduled to accompany technicians to establish the current decibel range.

Several ordinances were adopted, including an ordinance to convey parish property, an ordinance to sign necessary paperwork to apply for the LA Community Development Block Grant for Bogue Lusa Water Works District, and three ordinances for the parish to acquire property.

Five ordinances were introduced, with public hearings to be held on Monday, May 10. The first was to levy taxes for the 2021 millage at the same rate as the prior year. The rest were introductions of ordinances for the acceptance of various roads into parish inventory, and the abandonment of 0.15 miles of Robert Stuart Road.

A resolution was passed, with a 5-2 vote, for the parish to accept state roads into the Parish Road Inventory from the Louisiana Dept. of Transportation Road Transfer Program. The program is a way to get work done on certain parish roads, but in return the parish agrees to take on state roads that have been brought up to state standards. Proponents of the program like the new road work — both parish roads and the newly acquired state roads — and the state funding. Opponents worry about the parish’s responsibility for maintaining the large mileage of parish roads already in the parish inventory (close to 1,000 miles). That inventory tends to increase as the parish becomes more developed. The question is how the parish will be able to deal with that additional mileage in the future, when it is also taking on state roads.

Another resolution was passed in support of the Northshore Off Road Bicycling Association for grants from the Federal Highway Administration Recreational Trails Program to acquire, develop, and maintain motorized and non-motorized trails.

In public participation, Richard Berry, a resident from the Oak Grove community, asked the council and administration why Riverside Medical Center, a recipient of local public taxation, would not accept some residents’ medical insurance. Parish President Richard “Ned” Thomas Jr. assured Berry that he would look into the matter expeditiously.

In one of two proclamations made by Thomas in the President’s Report, a proclamation was made honoring the Washington Parish Library’s 75th anniversary for “providing communities with access to information and ideas” and “the role (the library) play(s) in our public life by encouraging creativity, promoting equality, and serving as a source of empowerment.” In the proclamation, Thomas also honored Helen Dykes Peck, the first Washington Parish librarian, who, on May 4, 2021, will celebrate her 100th birthday.

In another proclamation, the Robert Harrison Racing Team was honored for their outstanding acheivements on the drag racing track.

Also during the President’s Report, information was given about the region’s 24.31-percent COVID-19 vaccination rate, a small uptick in new cases in Washington Parish, and Thomas said, “the more (shots) we get, the more we knock it out.”

The last item on the agenda was for the parish council to review proposed changes and corrections in the Home Rule Charter, concerning the first two sections.