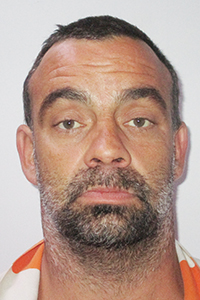 On Thursday, Washington Parish Sheriff’s Office corrections deputies traveled to Jones County, Miss., to pick up a Mt. Hermon man who was wanted for rape of a child, according to WPSO Chief Deputy Mike Haley.

Haley said that law enforcement officers in Jones County identified the wanted man during a routine seat belt inspection operation on Wednesday and realized he had outstanding warrants from Washington Parish. They immediately took him into custody and notified the WPSO.

Arrested was Willie Clay Stogner II, 43, a resident of Woodrow Duncan Road. He was transported to the Washington Parish Jail and booked on charges of aggravated rape, three counts of contempt of court and failure to appear in court.

Haley said that due to the sensitive nature of the crime, and in an effort to protect the identity of the victim, no additional information would be made public.

“We’ve been looking for Stogner for some time,” Washington Parish Sheriff Randy Seal said. “We had information he had traveled outside of Washington Parish and knew that eventually he would be caught. I am so grateful to our law enforcement partners in Jones County, who apprehended Stogner and held him until he could be brought back to the confines of the Washington Parish Jail.”