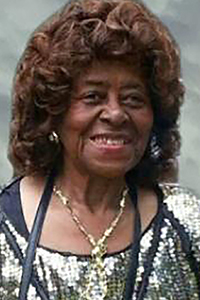 Minnie Adline Smith Lewis was born in Arcola, to the late Martina Denoms and Robert Smith Sr., on Aug. 7, 1932. Minnie attended Mount Cannon School and Church, where she was encouraged to join and serve the Lord.

She was the second-oldest girl of eight and the most mischievous of all of her siblings. She loved to play jokes on all of them (young or old). No one was safe from her pranks. She leaves behind her baby sister, Carrie Caldwell (Bird), and brother, Randall Smith, to remind us of all the pranks and also her caring nature. Preceding her and meeting her at Heaven’s Gates are: Cleotha Lewis (spouse); her siblings, William Smith, Willetta Vernon, Milton Smith, Charles Smith, Robert Smith Jr., Woodroe Smith and Joyce Smith; and son, Havon Lewis.

Minnie Lewis participated in the Eastern Stars in 1967. Although she wasn’t an active member, we still remember the crisp white attire that she wore and her beautiful smile she portrayed when she was with all the members.

She was also a CAN for 40-plus years. Most of her career was at Charity Hospital of New Orleans and Lafon Nursing Home. She was also a caregiver. Minnie loved her work and her patients. She would even take them fishing on any given day. This would be their outing and exercise for that day and it brought much joy to their hearts. She made her job look easy as a caregiver.

Funeral services will be held Saturday, April 17,  at 10 a.m. at the Kingdom of God Church, located at 814 Union Ave. in Bogalusa.
Cook-Richmond Funeral Home is in charge of arrangements.