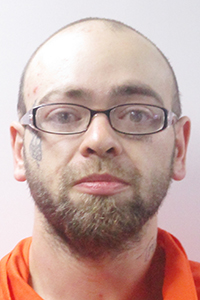 On Nov. 10, 2020, a Washington Parish Sheriff’s Office deputy responded to a complaint of domestic abuse in the Jenkins Road area north of Franklinton, according to WPSO Chief Deputy Mike Haley. Upon arrival, the officer reportedly discovered a female who had been physically assaulted, threatened with a weapon and held against her will. By the time the officer arrived, the assailant had fled the scene and could not be located.

Haley said that the victim identified her assailant and a warrant was issued for the arrest of Tristan Cole Anthony, 24, a resident of Alfus Thomas Road. Athey was able to elude officers until a WPSO deputy located him and arrested him Monday.

Athey was transported to the Washington Parish Jail and booked on charges of two counts of domestic battery with strangulation, simple kidnapping, aggravated assault and criminal damage to property.

Haley said that Athey has previous stays in the Washington Parish Jail. In 2013, he was charged with unauthorized entry of an inhabited dwelling. This was followed by a January 2020 arrest for criminal damage to property. In July 2020, he was arrested again and charged with aggravated assault, aggravated flight from an officer, three counts of simple battery and contempt of court.

“Jail is an appropriate place for Mr. Athey,” Washington Parish Sheriff Randy Seal said. “Even though he had a prior relationship with the lady, he had absolutely no excuse for assaulting her and holding her against her will. Many thanks to my officers for the initial investigation, the continued search for Athey, and the eventual arrest.

“It might seem good for criminals to run from the law, but sooner or later we will find and arrest you. Time is on our side. While you are constantly looking over your shoulder to see if we are behind you, rest assured that we are and eventually we will catch you and escort you to jail.”