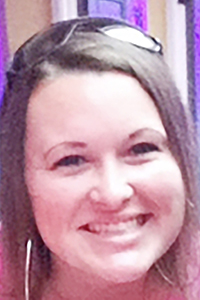 Kayla Anne Fornea Williams, a resident of Angie, passed away on Wednesday, March 17, 2021, at the age of 38. She was born on Oct. 24, 1982, in Bogalusa, and was the youngest child of Mickey and Reta Fornea. Kayla was a 2000 graduate of Varnado High School, and later graduated from Delta College. She was a certified medical assistant for Dr. Breaux for several years, before becoming disabled. She became a member of Angie Baptist Church at a young age.

Kayla was preceded in death by her father, Mickey Fornea, who she has missed terribly since his passing on March 15, 2007.

Kayla will be remembered as someone who had an unconditional, undying love for her family, as well as a friend that was always willing to help if she could. She was a “daddy’s girl” and her “mama’s baby.”

Visitation was held Monday, March 22, at Poole-Ritchie Funeral Home in Bogalusa from 2:30 p.m. until 4:30 p.m. The funeral service began at 4:30 p.m. on Monday, March 22, with the Rev. Lanny Williams officiating. Interment followed at Bonnie Cemetery in Angie.