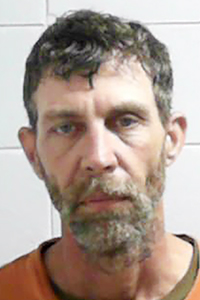 On the morning of Friday, March 12, Officers responded to a residence in the 700 block of Avenue G in reference to a report of two four-wheeler ATVs stolen during the night, according to officials.

Officers reportedly located tracks from the ATVs in the alleyway behind the residence. Officers followed the tracks until they ended on blacktop, and noticed surveillance cameras in the area. Upon viewing footage from the cameras, Officers were able to identify the suspect pushing the ATVs in the alley as Jesse Patterson Jr.

BPD officials said that based on Patterson’s direction of travel, officers were able to locate additional surveillance cameras with video footage of Patterson pushing the ATVs in another alley, and more tracks in the alley leading to Patterson’s residence in the 700 block of Avenue E.

Officers reportedly found Patterson outside of his residence, wearing the same clothing as seen in the video, and he was placed under arrest. The two stolen ATVs were found under a tarp behind his residence, recovered and returned to the owner.

Patterson was charged with two counts of theft of a motor vehicle ($1,000 to $5,000), and three attachments for failure to appear in court on various charges. Patterson was booked into the Bogalusa City Jail, and later transported to the Washington Parish Jail for housing.