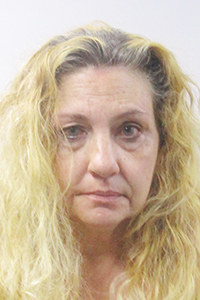 On Tuesday, Melissa Ann Hull, 51, a resident of Highway 16, was arrested by detectives with the Washington Parish Sheriff’s Office Drug Task Force.

“While on patrol south of Franklinton near Bethel Road, detectives encountered Hull, who consented to a search of her person after denying she was in possession of any illegal drugs,” WPSO Chief Deputy Mike Haley said. “A female deputy from the jail came to the scene, searched Hull, and discovered three bags of methamphetamine and a glass pipe used for smoking drugs.”

Hull was arrested and booked into the Washington Parish Jail charged with possession of methamphetamine with intent to distribute, possession of drug paraphernalia and obstruction of justice.

Haley said that Hull is no stranger to the Washington Parish Jail, having at least fourteen previous arrests documented in jail records. Those arrests were for a variety of charges including drug offenses, burglary offenses, attempted theft of a vehicle and driving while intoxicated.

“This is yet another example of someone who seems to have chosen a life of crime,” Washington Parish Sheriff Randy Seal said. “It grieves me to see someone who has made such poor life choices. While we always have a place in our jail for persons who habitually violate our laws, I would much rather see them living a productive and law-abiding life in our community.”