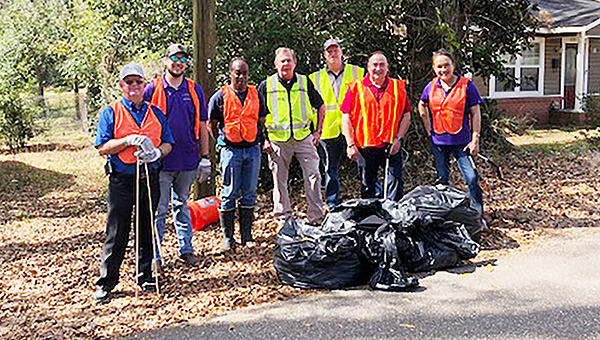 During a recent meeting regarding the Bogalusa City Court’s community service program, an idea was floated that if city leaders were to pick up trash it might raise awareness of the city’s two-fold trash problem.

On Thursday, the mayor and her assistant, city judge, police chief, fire chief, parks and recreation director, and members of the public works administration hit the streets to pick up litter. The group started at Anthony Fiorenza Drive, then moved to Georgia Avenue at Richmond, and finished up on Shriners Drive headed into the Terrace, ending up with close to 20 bags of trash.

First, is the general condition of litter throughout the city, parish and even neighboring St. Tammany. Since the COVID-19 quarantine began nearly a year ago, daily visits by the Department of Corrections crews have been suspended. In addition, the city court’s litter abatement program has been hit by low attendance since the pandemic. There have also been mechanical problems with the bus used to provide transportation. Just this week, crews from Rayburn Correctional Institute were back in the city helping us to beautify it.

The second problem is that the city has “litterbugs among us.” These are people who would rather dispose of their trash on the side of the road, rather than bringing it home or to a trash can to dispose of it properly. The city officials’ message to these people is simple — please do not litter!

Bogalusa has many fine citizens who recognize the beauty of Bogalusa. These citizens also know how terrible it is to drive around town to see the mess left by our fellow citizens. All we can do is ask people not to litter. If city officers see someone littering, they will issue a ticket to them for littering.

There is something everyone can do. If you see litter, pick it up and dispose of it. If everyone were to take a small part in keeping their block or street clean, our town would look better tomorrow. Spring is here, let’s make Bogalusa beautiful!