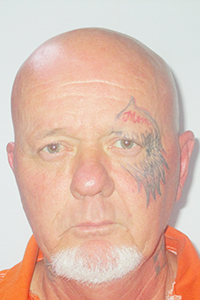 Martin, 55, a resident of Johnny Martin Road, was booked into the Washington Parish Jail charged with two counts of distribution of illegal drugs.

Haley said that Martin has at least four previous stays in the Washington Parish Jail. In 2011, he was booked for simple battery. In 2015, he was booked for battery on a police officer, criminal mischief, public intimidation and disturbing the peace. A later arrest in 2015 resulted in Martin being charged with driving while intoxicated and careless operation of a vehicle. This was followed by a 2016 arrest for failure to appear in court.

“As I’ve said many times before, our drug task force detectives work throughout the parish seeking those persons involved in the illegal drug trade as well as other criminal activity,” Washington Parish Sheriff Randy Seal said. “If you are one of those persons, I suggest you find a better way to spend your time. You might even consider becoming a productive member of society. Try it. You might like it.”