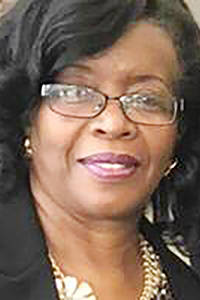 On Wednesday, Feb. 24, 2021, the Lord in His infinite wisdom came forth and silently received the life of a dear sister, aunt, and friend. At that hour, the rough side of the mountain was climbed, and the victory won.

Dorothy Lee Sartin was born Dec. 24, 1951, to the late Joseph and Audrey Sartin. Dot, as she was affectionately known, was the eldest of nine children. To be in Dorothy’s presence was to be uplifted by her unconditional love and support. She was full of life and laughter. Dorothy was always smiling, embracing everyone within reach, and had a tremendous inner strength grounded in her deep faith.

At an early age, Dorothy was introduced to Christ through her membership at Mt. Carmel Missionary Baptist Church under Pastor Versie Smith, later Pastor Tom Bailey, and now Pastor Dr. Douglas Hart. Throughout her adulthood, she remained steadfast with her commitment to our Lord. Her faith was demonstrated by her active involvement in numerous ministries in the church and community. She served as the financial secretary, Sunday school teacher, and coordinator of a plethora of events ranging from Pastor’s Anniversary to Christmas Programs. She was also a faithful member of the mission and later assumed the leadership role. Her ministry extended outside of the church’s four walls as she served on the citywide prayer band and singing convention financial committee. Dorothy’s faith was unwavering. Those that knew her best often heard her say, “When praises go up, blessings come down.” She knew her strength came from the Lord, and He was her ever-present help.

Having attended Central High School (class of 1969), Dorothy then matriculated to Southeastern Louisiana University, where she studied education. As the family historian, she not only appreciated the importance of sharing stories orally but remembering our heritage through books, articles, and pictures. She enjoyed nurturing and supporting children and valued reading and education. It was not uncommon for various books and educational material to be included in the many gifts to her nieces and nephews.

Her love for people, friendly demeanor, kind heart, and willingness to help others led her to a profession in retail management. This allowed her to interact with people daily. With a servant’s heart, Dorothy did not hesitate to assist others. She retired as a Department Manager from Walmart after diligently working there for over 30 years. Desiring always to give back to her community, she began serving as a mentor for the Youth Build Bogalusa Program and as a volunteer for Washington Parish Rape Crisis Line.

Dorothy made everyone she interacted with feel special, and she took her role as the eldest seriously. She was determined to honor her parents’ legacy. Her commitment was demonstrated by the love she showed her family and friends, especially her sister, Renee, and her nephew, Dantel, who she helped rear as a son. She truly found joy in helping others. Her presence will be missed by many, but her “twin” Brenda will feel a big void.

A viewing will be on Saturday, March 6, from 11 a.m. until 1 p.m. at Mount Carmel Missionary Baptist Church. It will be immediately followed by the funeral service with Rev. Dr. Douglas Hart, pastor, officiating. Masks are mandatory.