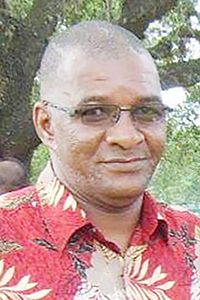 “My health may fail, and my spirit may grow weak, but God remains the strength of my heart; he is mine forever” (Psalms 73:26).

Willie Ray Johnson was born Feb. 28, 1958, to the late Joseph Johnson Jr. and Ora Lee Brumfield Johnson. He departed this life on Jan. 7, 2021, at his home in Houston, Texas. Willie Ray was the seventh child of eight siblings. He was born and raised in Bogalusa. Willie Ray graduated from Bogalusa High School in May 1977. He enlisted in the U.S. Army on Nov. 15, 1977, and he was released from active duty on Aug. 15, 1980.

Later in life, Willie Ray moved to Houston. He worked for Spring Branch Transitional Care Center, Hillendahl Clinic, for over 10 years. He will be missed and loved by everyone there. Willie Ray was a hard worker and offered good advice. He enjoyed cooking, watching TV, telling jokes and walking in the park.

Willie Ray leaves to cherish his memory: his beloved daughter and son-in-law, LaQuandra and Victor Robinson with their two children, Victoria and Victor III; three beautiful sisters, Gilda Diane Bell (Tommy Brumfield) and Rose (Eddie) Adams of Bogalusa and Barbara (Ronald) Felice of Richmond, Texas, who will hold him dear to heart; and a host of aunts, uncles, nieces, nephews, cousins and friends (coworkers at Spring Branch Transition Care Center Hillendahl Clinic), who remain to hold his memory.

The Johnson family would like to acknowledge his coworkers at the Spring Branch Transition Care Center (Hillendahl Clinic), his extended family, for their prayers, love and support during the loss of our loved one.

A graveside memorial service will be Saturday, March 6, at 1 p.m. at Bogalusa Cemetery. The Rev. Charlie Parker will officiate.