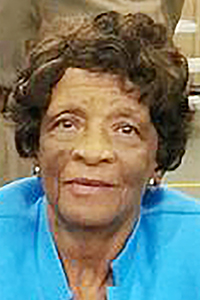 Katherine Bobby Joe Evans Darden, born Aug. 29, 1931, in Bogalusa, to the late Solomon Edwin and Lela Samela Thomas Evans, departed this life on Feb. 17, 2021, at the age of 89. She was the fifth of eight children.

At a young age, Ms. Katherine joined Salter’s Chapel A.M.E. Church. In the early 1980s, she joined Bethlehem Baptist Church under the late Rev. Dr. Aaron J. Thompson Sr. until his death. Afterwards, the Rev. Christopher D. Matthews became her pastor and she remained a faithful member and a Child of God until her death.

Ms. Katherine attended Central Memorial High School. Upon graduating, Katherine moved to Jackson, Tenn., where she attended Lane College. In 1956, she united in holy matrimony to the late Charles E. Darden Sr. and to this union five children were born. They relocated to Springfield, Tenn. In 1961, the family decided to return to Bogalusa, making it their hometown. Ms. Katherine worked as a seamstress for the Pioneer Parachute Plant in Columbia, Miss., for 10 years. She later relocated to Gulfport, Miss., where she became an employee for the Pass Christian Garment Factory in Pass Christian, Miss., until she retired in 1995. Later, she became a counselor for the YMCA and a counselor for Community in Action at Ladner Homes Community Center in Gulfport, Miss. She also was the co-founder of Snowballs and More in Gulfport, Miss.

Funeral services will be held Sunday, Feb. 28, at 1 p.m. at Crain and Sons Funeral Home Chapel in Bogalusa.