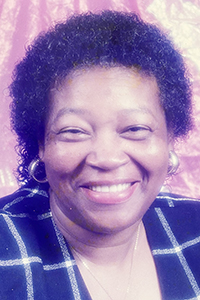 She was the youngest of seven children, of whom five preceded her in death.

She leaves to cherish her memory: her husband, Deckzell Thompson; one brother, Edward Bridges of Chicago, Ill.; and a beloved niece, Beatrice (James) Richardson of Washington Park, Ill.

At the age of 17, she met and married Woodzell Howard and to this union 10 children were added, Calvert (Lora) Howard of Fort Worth, Texas; Sandra Allen of Henderson, Texas; Yvonne (Vyncent) Stewart of Bentonville, Ark.; Woodzell Howard Jr. of Fort Worth, Texas; Kenneth (Muriel) Howard of Japan; Larry Howard of Henderson; Lisa (Leon) Bobo of Russellville, Ark.; Tracy (Sharron) Howard of Fort Worth; Arthur (Loretha) Howard of Wentzville, Mo.; and Nathaniel (Leanna) Rachel of Florissant, Mo. She also leaves 23 grandchildren, 18 great-grandchildren, and a host of nieces, nephews, loving relatives and good friends. She was raised by her great-grandparents, Edward and Mary Dunlap, in Lexa, Ark.

She was baptized into Christ at Friendship Missionary Baptist Church.

She later moved to Dardanelles, Ark., where she met and married Deckzell Thompson and they moved to Angie, where they established their home for the past 25 years.

A drive-through viewing will be held on Friday, Feb. 26, from 3 p.m. until 6 p.m. at Crain and Sons Funeral Home of Bogalusa.

A funeral service will be Saturday, Feb. 27, at 11 a.m. at Mt. Zion Missionary Baptist Church. Interment will follow in Robinson Cemetery.