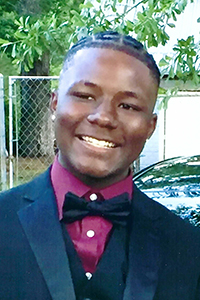 “The Lord is my shepherd; I shall not want. He maketh me lie down in green pastures: he leadeth beside the still waters. He restoreth my soul: he leadeth me in the apth of righteousness for his name’s sake. Yea though I walk through the valley of shadow of death , I will fear no evil: for thou art with me. Thy rod and thy staff they comfort me.” (Psalms 23:1-4).

Larmond Henri “L.G.” Godbolt was born to Lamont Godbolt and Patrice Fields on July 16, 2001, in Covington.

Henri attended Bogalusa High School, where he was a member of the BHS “Big Bad” Lumberjacks’ Band under the leadership of Mr. Chad Harry.